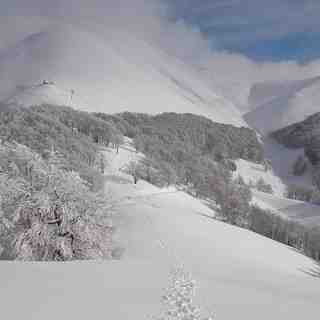 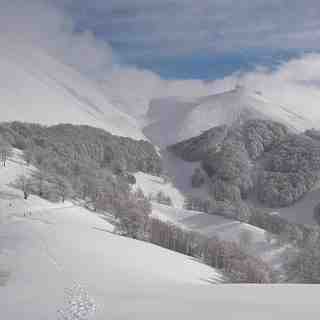 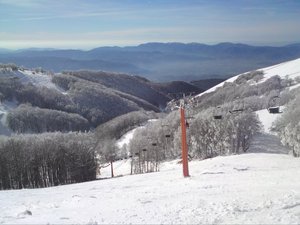 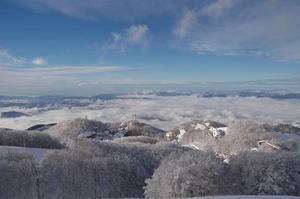 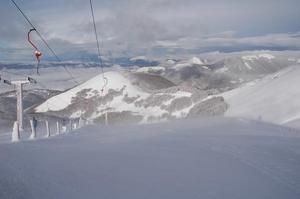 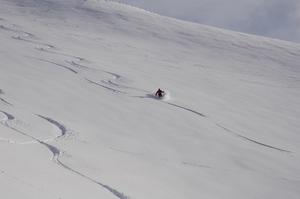 Terminillo, in the Apennines, is popular for Nordic skiing (26km of wooded rails around 1500-1600m, including the 13km I Cinque Confini) and provides good downhill possibilities too with 8 lifts serving 13 slopes on over 619 vertical metres. Terminillo has reasonable altitude, (chair lift: Erba pulita - Terminille reaches 2101m) and usually opens from mid December to late April. 3 ski schools and a snow park comprising 200 metres of slopes for snow-boarding are near the chair lift: Cardito Sud at Terminillo. 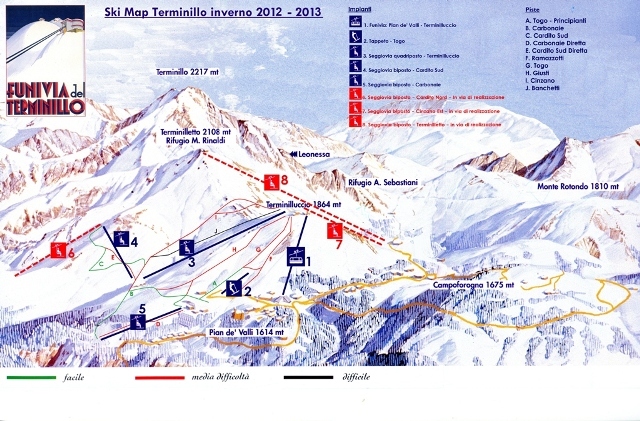 The Funivia of Terminillo Srl, in collaboration with the Pro Loco and the Ski School of Terminillo are pleased to announce the special offers available every Thursday until the end of the season:

∗ Ski lessons, ski hire and restaurants (that are part of the agreement)a discount of 20%

Skiing in Italy. My Terminillo review:
Terminillo is fantastic for families with children. My twins had their first skiing experience age 3 on the slope between La Piccola Baita restaurant and ski school. We kept coming back every year after Christmas. The place is much smaller, cheaper, more relaxed and less overcrowded than resorts in French or Italian Alps. We usually go for a private flat rental. My kids' first skiing lesson (age 5) with the English speaking Italian skiing instructor Massimo delighted them as well as us, parents. After the first day's 10min test when they could barely demonstrate a basic shaky plough the instructor said that they were good enough to go on the red run (not as steep or long as those in France or Austria). He really performed an impossible task - took two kids, without poles, down the red run with just a handful of falls. And promptly repeated this a few times. The success was mainly down to his brilliant instruction and fantastic skill with kids. My twins made absolutely astonishing progress. Learnt basics in 3 days, or you could say in a matter of hours. They consolidated this and took it a few steps further in subsequent years with the same instructor. My wife and me took advantage now and then and had a blast down the higher red and black runs.

Terminillo is just over two hours drive from Rome. You may need chains or a four-wheel drive car with winter tyres to negotiate the last few kilometres of the, often snowy, road (there are police car checks). Park in front of ski hire place with the first kiddie belt ski lift just a short walk away. Hire the skis and boots and up you go to the ticket kiosk. Take the belt lift up. From the top of it you can take shortcut to Carbonaia run. Italians are lovely and very helpful, the food is very nice and not too expensive. Terminillo is a well kept secret, so make sure you don't talk about it. :)
Weather:
wunderground.com/global/stations/16219.html
Snow:
snow-forecast.com/resorts/Terminillo
apt.rieti.it/scheda_bol.php?id=1
search for La Piccola Baita hotel and restaurant Webcam
www lapiccolabaita net/webcam.html 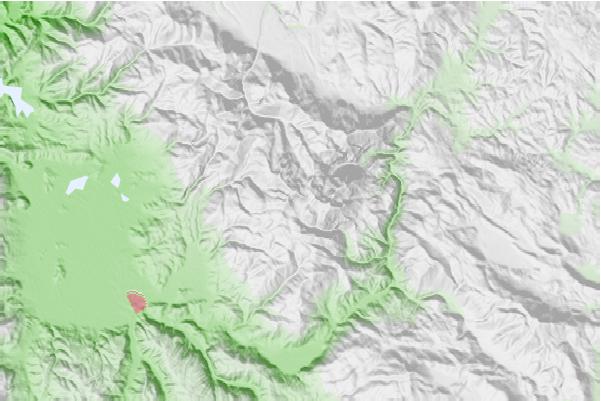