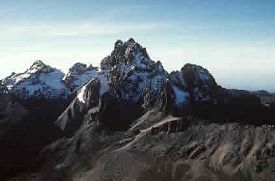 Mount Kenya (Kirinyaga) is the second highest mountain in Africa. Like Mount Kilimanjaro, it is an extinct volcano. It dominates the Central Kenyan highlands, towering just seventy miles north of Nairobi, and ten miles south of the Equator. The mountain was once much higher, but today it is a large dome, roughly 60 miles in diameter, from which rises the steep, eroded remains of its volcanic core. Mount Kenya (Kirinyaga) has twin summits: a pair of rocky snow-capped peaks, Batian (17,057 feet./5199 metres) and Nelion (17,021 feet./5188 metres), separated by a narrow gap and surrounded by an intricate system of peaks and ridges, with many high glaciers. More technically difficult than Kilimanjaro, Mount Kenya (Kirinyaga) offers some of Africa's finest rock and ice climbing. Huts are available along the most common routes, but the more serious routes may require bivouacs. The mountain is heavily forested, and its ecological diversity is one of its primary attractions. A variety of plant life grows on the slopes of Mount Kenya (Kirinyaga), including camphor, cedar, and bamboo. Elephant, rhino, buffalo and leopard roam the surrounding areas. 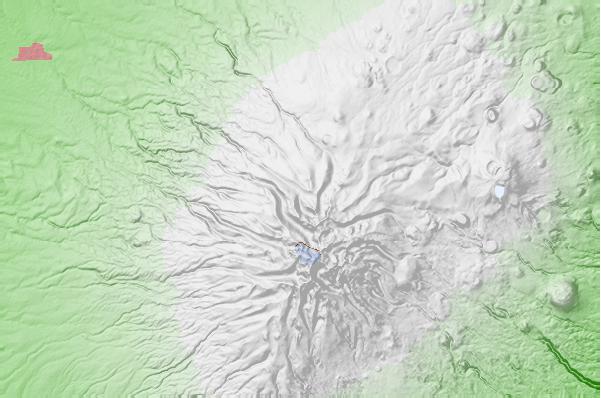